As we embark upon Christmas next weekend I want to share a little on what I have been reflecting.  Maybe it’s because I’m a woman or a mom, but I tend to think a lot about Mary when I consider the Christmas story.  I recently read a wonderful book by Francine Rivers titled A Lineage of Grace. (It’s actually a collection of 5 short stories on the women named in Jesus’ lineage: Unveiled (Tamar), Unashamed (Rahab), Unshaken (Ruth), Unspoken (Bathsheba), & Unafraid (Mary)).  Francine has the amazing gift of teasing out a Biblical account and really putting feeling and context to the story without altering its accuracy.  Reading the account of Mary was captivating.

What would it have been like to be a 14 year-old girl, engaged, anticipating and preparing for a wedding and what married life would be like when an angel literally stops you in your tracks? (Don’t just read that word because you are familiar with it – actually think about an ANGEL appearing to you).  The angel says you are going to be pregnant and have a baby boy which, dumb-founded, you talk back to the angel and say, “How? I’m a virgin!”, with which he replies, “The Holy Spirit will come upon you”.  Luke 1:38 “Mary responded, “I am the Lord’s servant.  May everything you have said about me come true.”  And then the angel left her.”  Really?  Like, seriously?  I would have way more to say than just, “Okie Dokie God, whatever you say.”  I mean: First, what is the Holy Spirit (keeping in mind the Holy Spirit had not been ‘released’ onto believers yet (Luke 24:49; Acts 2) and she would have had no context of the Holy Spirit)?  How will He come upon me? When will this happen?  What am I supposed to tell my parents?  How do I explain this to Joseph, you know, that guy I’m ENGAGED to?  But luckily God chose Mary; and her response proves his choice wise. 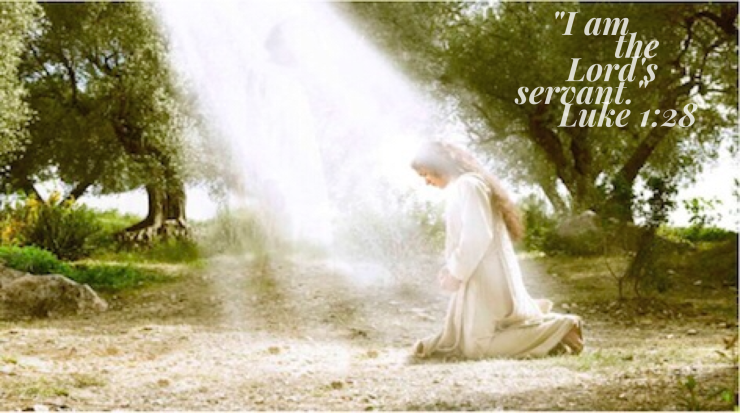 And to give you a little more context – no one had heard from God in over 400 years.  Four. Hundred. YEARS.  (I mean, people, the good ole’ U.S. of A. is only 240 years old – we are talking almost double that time).  She was obviously raised in a faithful and believing home, but I’m sure by now a lot of people were way beyond doubting the God of the Jews existed.  And now you are going to tell me that he breaks his silence by appearing to a 14-year old girl?  God sure knows how to make things interesting.  The Scriptures go on in verse 39 by saying, “A few days later…”.  Think about this – what in the world was going on in Mary’s heart and mind during those few days?  Do you think Mary told Joseph what she had seen and experienced?  (I don’t know if it would’ve gone over very well: “So Joe, I know we don’t know each other very well yet, if at all, and no one has heard from God in quite some time, but he just told me I was gonna get pregnant, but don’t worry I’ll still be a virgin.”  Uh, yeah, ummm, ok…)  Do you think she told her parents? Do you think she pondered it and kept it to herself (as she will do in 2:19 after Jesus is born & again in 2:51)?  Did she sleep at all?  (I wouldn’t be able to sleep, keeping one eye open looking for this ‘Holy Spirit’ the angel referenced).

Mary stayed with her cousin Elizabeth for the first 3 months of her pregnancy and then returned home (vs. 56).  So for the remaining 6 months she was pregnant, engaged, living with her parents.  Think about the stares she received.  The gossip she heard.  Think about the ridicule Joseph received for not breaking the engagement with his ‘unfaithful’ fiancé (By now Joseph had his own angel encounter and was in on the truth (Matthew 1:20-25)).  Think about the comments her parents received; what a joke the dowry was that her father had worked so hard to collect for Mary’s hand in marriage.  The loneliness and injustice would have been heavy to bear.  All of this confusion and scandal with the parents of the long-awaited King and Redeemer?  It’s unimaginable.  It’s unthinkable.  It’s not what was expected.

Yet, Mary’s response to all of this can be summarized by the opening verse of her song: “Oh, how my soul praises the Lord.  How my spirit rejoices in God my Savior!” (v. 46-47).  For the rest of the birth account of Jesus the Bible really doesn’t tell us anything else Mary says. It just tells us what she does:  She gave birth, she loved and cared for Jesus – probably snuggling with her first-born child and even nursing him, and she treasured much in her heart.

So when I think of sweet Mary I just can’t help but be impressed and in awe of her faith.  Her absolute and complete unwavering trust in God.  All with reckless abandon. Not caring what the consequences were because she knew who who was calling the shots.

Christmas shouldn’t be measured by how tall your stack of gifts is on Christmas morning.  Christmas should be about remembering and acknowledging the story of how our Savior entered this world.  This year, maybe you can think more about his mom and her part in the story.  As you celebrate Christmas next weekend I encourage you to practice a “Mary-habit”; treasuring/pondering much in your heart.

Where in your life should you be trusting God more?

In what situation, relationship, or area in your life can you recklessly have more faith?

Have you responded in praise to that unexpected, unthinkable event in your life?

Your level of trust, your level of faith and your response should impress those that encounter you and hear of your story.

One Reply to “Reckless Abandon”